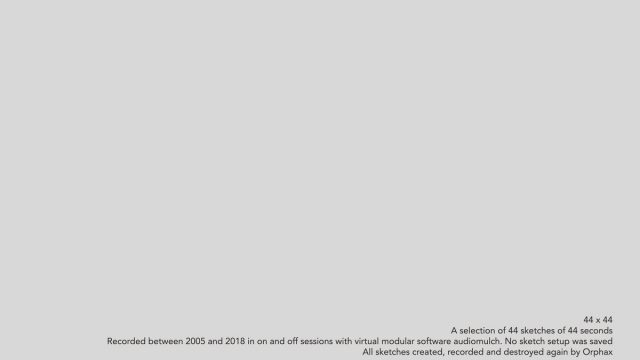 44×44 started as a project in 2005 when I was working on a few sketches to try out some new things.
The first few sketches were all 44 seconds, which gave me the idea to make 44 sketches in total, all of 44 seconds.

So once in a while I would work on this, without any set deadline to finish this. Over the years the idea also changed. I removed some old sketches, recorded new ones and repeated this various times.
Eventually, I randomized all sketches, so it is not clear anymore what was recorded when and in which order.

This isn’t a regular release, but a selection of sketches which were created, recorded and destroyed again. As such it is impossible to recreate these sketches in the same way as you can hear them in this selection.
Though, the sketches will have a new purpose as well. First of all, they are here now to be listened to and enjoyed.
Second of all, they will be used as a source for new music.