Spectrum is a continuation of my interest in the perception of time, and at the same time an acknowledgement of me being on the autism spectrum. The album is released as limited CD in hand assembled artwork limited to 150 copies.

This album, with my interest in minimalism, opposed to bombastic music, is a form to embrace my autism and to accept it as it is. I didn’t change as a person, but I do know myself better. I got diagnosed with this about 2 1/2 years ago, which was quite the shock for me at that moment. But in the past 2 1/2 years I have learned so much about this.

The music was recorded live at various venues and home and edited and mixed into these two pieces between September 2019 and August 2020.

Initially, this album was intended to be released through the amazing Russian label Stellage. It got delayed multiple times over the past 1 1/2 year, so it didn’t happen.
After the war in Urkaine started, I talked about the release with Viktor from Stellage. And the result is that I now release this album myself as a limited edition in hand made artwork.
I want to thank Viktor for the trust and belief in my music.

“Spectrum” is the title of the latest output by fellow Dutchman and Droner Orphax. This album was supposed to be released on a Russian label Stellage, but due to the war and some other circumstances, it was delayed over and over, so Sietse van Erve wisely decided to release this one himself; Simply because it’s too gorgeous a piece of music to not be released and shown to the world. It will soon be available as limited CD in handmade artwork with a beautiful minimal feel.
Most of you will have heard Orphax’ music or at least heard of him. He is a very active member of the experimental music scene in the Netherlands. He runs the Moving Furniture label, he organizes performances in Amsterdam, and yes he makes and releases music under the name Orphax. His output – or at least what I know from him and heard from him live – consists of quite complex drones. Hearing them might be boring for one person because most of the time there is a stable sound forming the structure of the drone; Call it the fundament. But around that fundament, so much is happening … So much beautiful changes in perspective, stereo image, dynamics …
So what is “Spectrum” about? In his own words: “It is a continuation of my interest in the perception of time, and at the same time an acknowledgement of me being on the autism spectrum.” Quite a heavy subject, but that is what art is about. It’s not about flowers and bees or the neighbour’s labradoodle. If you want things to leave an impression, you approach your art seriously. And “Spectrum” is in all aspects a great example.
The fundamental drone gets triggered over and over by impulses and sound from all over the place, making it so that the fundamental drone becomes a new drone by it’s external impulses. But at the same time, not all of its behaviour is as expected or as fluent as one would wish for continuity. Making the result beautifully organic, alive, erratic and yet solid. It’s like a stable personality diagnosed somewhere in the autism spectrum with sometimes a bit of erratic behaviour, but it’s making the man who he is. Opting for a high position on my year list. (BW)

When it comes to drones, i tend to feel that each listener’s mileage doesn’t merely vary, but is often entirely unique. Nonetheless, from my perspective there are some nice things going on in Spectrum, a new two-track album from Netherlands artist Sietse van Erve, a.k.a. Orphax. The essence of each track is the placement of sustained tones in different degrees of proximity to each other, so as to cause various forms of sympathetic and disruptive resonance (to call them ‘consonance’ and ‘dissonance’ in this context doesn’t really make sense). A key aspect is the dronal nature of these resonances which, as with all music of this kind, raises two interesting listening quandaries, both to do with the perception of change. The first arises from the way pure electronic tones reverberate throughout the space (obviously, this wouldn’t apply if listening through headphones); turning or tilting the head often causes the emphasis (and even the nature) of the tones to change. The second is due to Orphax’s patience with these pitch superpositions, to the extent that – in conjunction with the first quandary, since it’s difficult to listen without moving one’s head at all – it can be difficult to know whether a perceived change is real or imaginary.

i like this kind of messing with the mind and ears, it’s an extra layer of somewhat puzzling stimulation that makes it impossible to switch off at any point. And it’s this that makes Spectrum, as i said at the start, such a unique listening experience, as a lot will depend on the context in which the act of listening takes place. (i haven’t tried headphones, as i prefer the sense of flux that takes place in a physical space.) So i guess that therefore means that anything more specific i might say about Spectrum needs to be taken with a pinch of salt; your mileage, etc. etc.

Nonetheless, in addition to the challenges the pieces provoke in terms of long-term change perception, there are obvious instances where Orphax makes distinct alterations to what’s going on, though in some cases, knowing precisely when these alterations begin can be similarly hard to discern. For example, around four minutes into ‘Spectrum I’, there are faint tones just audible above the judder, and a couple of minutes later there’s some definite pulsating taking place. i’m still not sure at what point they first became audible. It’s not until a little over nine minutes in that an overt change happens, when everything is attenuated, pulled back to a simpler cluster, almost a dyad, that shimmers. Its subsequent transformations bring about a brisk low pulsing, and a levelling out such that the higher tones, hitherto ethereal, come to feel more substantial, almost equal to the lower register sounds.

‘Spectrum II’ contrasts slightly due to a generally simpler mode of behaviour. While it’s opening collection of pitches initially seem ambiguous and without a sense of stasis, the opposite turns out to be true, in both cases, focused on assertive, essentially omnipresent perfect 4ths and 5ths formed by shifting and accumulating Cs and Fs. Around these pitches other tones again jar and impinge, their relative weights causing ripples and distortions to the purity of the underlying drone. The stasis is unassailable, though; eight minutes in a chiming appears, later there’s a glitch and some high shining notes materialise later still, all becoming mere embellishments to the eternal drone at the music’s core. There are some of the same issues in change perception, yet here too Orphax introduces a marked attenuation in the closing minutes, focusing everything into a shimmering beam before abruptly vanishing, leaving only a slowly-turning bass note (and faint intangible wisps) to bring the work to a close.

Drone music can be polarising in terms of listener involvement, but i particularly like the way nothing in Spectrum feels passive, encouraging a constant, active engagement, both enjoying the sounds themselves and the slow transformations they undergo. Orphax says that the title is in part “an acknowledgement of me being on the autism spectrum”. As i have little to no personal or second-hand experience of autism, i wouldn’t want to make any clumsy or simplistic extra-musical associations, though perhaps the emphasis on pitch relationships, and the effects of their proximity and juxtaposition, is a connection to that experience.

Released on 27 May, Spectrum is available as a limited edition, handmade CD and digital download, direct from Bandcamp.

Buy a CD or digital from my Bandcamp https://orphax.bandcamp.com/album/spectrum

or find it on various streaming services: https://orcd.co/orphax-spectrum 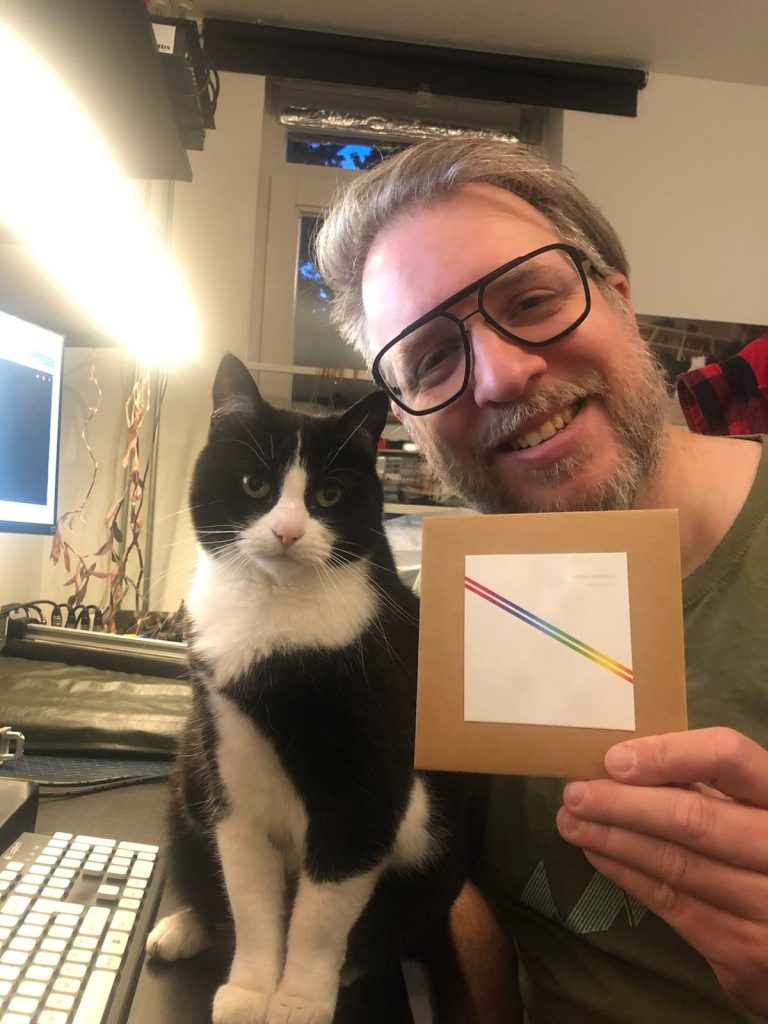