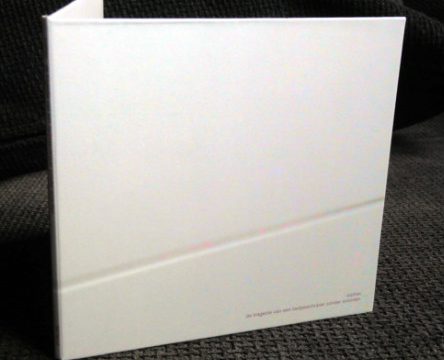 “De tragedie van een liedjesschrijver zonder woorden” (The tragedy of a song writer without words) is the first normal CD by Orphax. This album contains music that has been written between April 2005 and July 2007 and retouched again in 2008 and 2010. The period these songs were written was one with many transitions in the live of van Erve. It was the end of his student years, the begin of his working years, a period where he struggled with an at that time unknown disease, a period where he was searching for answers to questions he didn’t know. Inspired by this he wrote these wordless pieces.

The music on this release, at first planned for release in 2011, shows yet another look into the ever expanding work by Orphax. Even more than his other work this one is dealing with small details in the composition creating an environment that feels comfortable but at the same time grabs you by the throat. The music goes from minimal droning sounds to isolationist soundscapes and experimental ambient moods.

Pre-order your own copy right now through the Moving Furniture Records Bandcamp later on a special edition only available directly through me will be added to my own shop (that will be limited to 25 and comes in handmade box, with bonus CD and some pictures, though in the crowd-funding this almost sold-out already, this will be 30 euro excl. shipping)